From Wikipedia, the free encyclopedia

The Persian Gulf (Persian: خلیج فارس‎, translit. Xalij-e Fârs, lit. ‘Gulf of Fars’) is a mediterranean sea in Western Asia. The body of water is an extension of the Indian Ocean (Gulf of Oman) through the Strait of Hormuz and lies between Iran to the northeast and the Arabian Peninsula to the southwest.[1] The Shatt al-Arab river delta forms the northwest shoreline.

The Persian Gulf was a battlefield of the 1980–1988 Iran–Iraq War, in which each side attacked the other’s oil tankers. It is the namesake of the 1991 Gulf War, the largely air- and land-based conflict that followed Iraq’s invasion of Kuwait.

The gulf has many fishing grounds, extensive reefs (mostly rocky, but also coral), and abundant pearl oysters, but its ecology has been damaged by industrialization and oil spills.

This inland sea of some 251,000 square kilometres (96,912 sq mi) is connected to the Gulf of Oman in the east by the Strait of Hormuz; and its western end is marked by the major river delta of the Shatt al-Arab, which carries the waters of the Euphrates and the Tigris. Its length is 989 kilometres (615 miles), with Iran covering most of the northern coast and Saudi Arabia most of the southern coast. The Persian Gulf is about 56 km (35 mi) wide at its narrowest, in the Strait of Hormuz. The waters are overall very shallow, with a maximum depth of 90 metres (295 feet) and an average depth of 50 metres (164 feet).

Countries with a coastline on the Persian Gulf are (clockwise, from the north): Iran; Oman’s exclave Musandam; the United Arab Emirates; Saudi Arabia (in Iran this is called “Arvand Rood”, where “Rood” means “river”); Qatar, on a peninsula off the Saudi coast; Bahrain, on an island; Kuwait; and Iraq in the northwest. Various small islands also lie within the Persian Gulf, some of which are the subject of territorial disputes between the states of the region.

The International Hydrographic Organization defines the Persian Gulf’s southern limit as “The Northwestern limit of Gulf of Oman”. This limit is defined as “A line joining Ràs Limah (25°57’N) on the coast of Arabia and Ràs al Kuh (25°48’N) on the coast of Iran (Persia)”.[6]

Oil and gas pipelines and fields

The Persian Gulf and its coastal areas are the world’s largest single source of crude oil,[citation needed] and related industries dominate the region. Safaniya Oil Field, the world’s largest offshore oilfield, is located in the Persian Gulf. Large gas finds have also been made, with Qatar and Iran sharing a giant field across the territorial median line (North Field in the Qatari sector; South Pars Field in the Iranian sector). Using this gas, Qatar has built up a substantial liquefied natural gas (LNG) and petrochemical industry.

In 2002, the Persian Gulf nations of Bahrain, Iran, Iraq, Kuwait, Qatar, Saudi Arabia, and the UAE produced about 25% of the world’s oil, held nearly two-thirds of the world’s crude oil reserves, and about 35% of the world’s natural gas reserves.[8][9] The oil-rich countries (excluding Iraq) that have a coastline on the Persian Gulf are referred to as the Persian Gulf States. Iraq’s egress to the gulf is narrow and easily blockaded consisting of the marshy river delta of the Shatt al-Arab, which carries the waters of the Euphrates and the Tigris rivers, where the east bank is held by Iran. 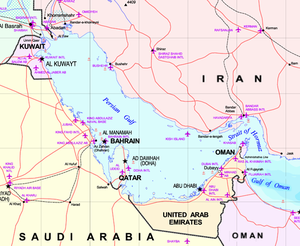 Map of the Persian Gulf. The Gulf of Oman leads to the Arabian Sea. Detail from larger map of the Middle East.

In 550 BC, the Achaemenid Empire established the first ancient empire in Persis (Pars, or modern Fars), in the southwestern region of the Iranian plateau. Consequently, in the Greek sources, the body of water that bordered this province came to be known as the “Persian Gulf”.[10]

During the years 550 to 330 BC, coinciding with the sovereignty of the Achaemenid Persian Empire over the Middle East area, especially the whole part of the Persian Gulf and some parts of the Arabian Peninsula, the name of “Pars Sea” is widely found in the compiled written texts.[1]

In the travel account of Pythagoras, several chapters are related to description of his travels accompanied by the Achaemenid king Darius the Great, to Susa and Persepolis, and the area is described. From among the writings of others in the same period, there is the inscription and engraving of Darius the Great, installed at junction of waters of Red Sea and the Nile river and the Rome river (current Mediterranean) which belongs to the 5th century BC where Darius the Great has named the Persian Gulf Water Channel: “Pars Sea” (“Persian Sea”).[1]

Considering the historical background of the name Persian Gulf, Sir Arnold Wilson mentions in a book published in 1928 that “no water channel has been so significant as Persian Gulf to the geologists, archaeologists, geographers, merchants, politicians, excursionists, and scholars whether in past or in present. This water channel which separates the Iran Plateau from the Arabia Plate, has enjoyed an Iranian Identity since at least 2200 years ago.”[1]

Before being given its present name, the Persian Gulf was called many different names. The classical Greek writers, like Herodotus, called it “the Red Sea”. In Babyloniantexts, it was known as “the sea above Akkad”.[citation needed] 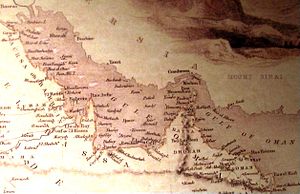 The name of the gulf, historically and internationally known as the Persian Gulf after the land of Persia (Iran), has been disputed by some Arab countries since the 1960s.[13] Rivalry between Iran and some Arab states, along with the emergence of pan-Arabism and Arab nationalism, has seen the name Arabian Gulf become predominant in most Arab countries.[14][15] Names beyond these two have also been applied to or proposed for this body of water.

Picture depicting extent of early civilizations around the Persian Gulf, including Lackhmids, and Sassanids.

Picture depicting the Achaemenid Persian empire in relation to the Persian Gulf.

Picture depicting “Persian Corridor” through which the Allies provided supplies to USSR.

The world’s oldest known civilization (Sumer) developed along the Persian Gulf and southern Mesopotamia. The shallow basin that now underlies the Gulf was an extensive region of river valley and wetlands during the transition between the end of the Last Glacial Maximum and the start of the Holocene, which, according to University of Birmingham archaeologist Jeffrey Rose, served as an environmental refuge for early humans during periodic hyperarid climate oscillations, laying the foundations for the legend of Dilmun.[16]

Between 625 BC and 226 AD, the northern side was dominated by a succession of Persian empires including the Median, Achaemenid, Seleucid and Parthian empires. Under the leadership of the Achaemenid king Darius the Great (Darius I), Persian ships found their way to the Persian Gulf.[18] Persian naval forces laid the foundation for a strong Persian maritime presence in Persian Gulf, that started with Darius I and existed until the arrival of the British East India Company, and the Royal Navy by mid-19th century AD. Persians were not only stationed on islands of the Persian Gulf, but also had ships often of 100 to 200 capacity patrolling empire’s various rivers including Shatt-al-Arab, Tigris, and the Nile in the west, as well as Sind waterway, in India.[18]

The Achaemenid high naval command had established major naval bases located along Shatt al-Arab river, Bahrain, Oman, and Yemen. The Persian fleet would soon not only be used for peacekeeping purposes along the Shatt al-Arab but would also open the door to trade with India via Persian Gulf.[18][19]

Following the fall of Achaemenid Empire, and after the fall of the Parthian Empire, the Sassanid empire ruled the northern half and at times the southern half of the Persian Gulf. The Persian Gulf, along with the Silk Road, were important trade routes in the Sassanid empire. Many of the trading ports of the Persian empires were located in or around Persian Gulf. Siraf, an ancient Sassanid port that was located on the northern shore of the gulf, located in what is now the Iranian province of Bushehr, is an example of such commercial port. Siraf, was also significant in that it had a flourishing commercial trade with China by the 4th century, having first established connection with the far east in 185 AD.[20]

Portuguese expansion into the Indian Ocean in the early 16th century following Vasco da Gama’s voyages of exploration saw them battle the Ottomans up the coast of the Persian Gulf. In 1521, a Portuguese force led by commander Antonio Correia invaded Bahrain to take control of the wealth created by its pearl industry. On April 29, 1602, Shāh Abbās, the Persian emperor of the Safavid Persian Empire expelled the Portuguese from Bahrain,[21] and that date is commemorated as National Persian Gulf day in Iran.[22] With the support of the British fleet, in 1622 ‘Abbās took the island of Hormuz from the Portuguese; much of the trade was diverted to the town of Bandar ‘Abbās, which he had taken from the Portuguese in 1615 and had named after himself. The Persian Gulf was therefore opened by Persians to a flourishing commerce with the Portuguese, Dutch, French, Spanish and the British merchants, who were granted particular privileges. The Ottoman Empire reasserted itself into Eastern Arabia in 1871.[23] Under military and political pressure from the governor of the Ottoman Vilayet of Baghdad, Midhat Pasha, the ruling Al Thani tribe submitted peacefully to Ottoman rule.[24] The Ottomans were forced to withdraw from the area with the start of World War I and the need for troops in various other frontiers.[25]

In World War II, the Western Allies used Iran as a conduit to transport military and industrial supply to the USSR, through a pathway known historically as the “Persian Corridor”. Britain utilized the Persian Gulf as the entry point for the supply chain in order to make use of the Trans-Iranian Railway.[26] The Persian Gulf therefore became a critical maritime path through which the Allies transported equipment to Russia against the Nazi invasion.[27]

From 1763 until 1971, the British Empire maintained varying degrees of political control over some of the Persian Gulf states, including the United Arab Emirates (originally called the Trucial States)[28][29] and at various times Bahrain, Kuwait, Oman, and Qatar through the British Residency of the Persian Gulf.

The United Kingdom maintains a high profile in the region to date; in 2006 alone, over 1 million British nationals visited Dubai.[30][31] In 2014, the UK announced it will reestablish a permanent military base, HMS Jufair, in the Persian Gulf, the first since it withdrew from East of Suez in 1971.[32][33][34]

See also: List of islands in the Persian Gulf

Eight nations have coasts along the Persian Gulf: Bahrain, Iran, Iraq, Kuwait, Oman, Qatar, Saudi Arabia, and the United Arab Emirates. The gulf’s strategic location has made it an ideal place for human development over time. Today, many major cities of the Middle East are located in this region.